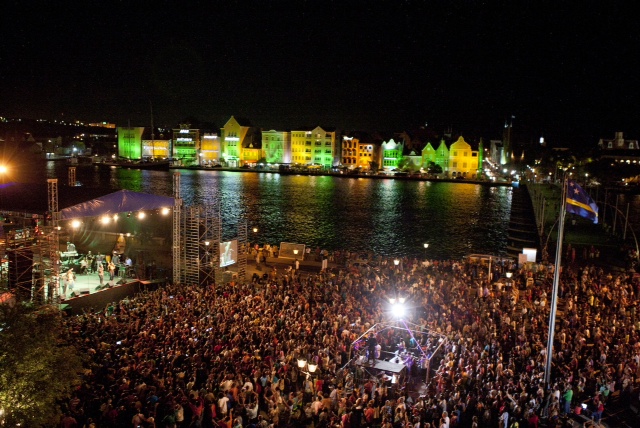 Curaçao North Sea Jazz festival (CNSJ) is one of the most exciting programs sponsored by the Fundashon that ties in perfectly with its objectives. The international level of the festival and all of its top-shelf artists attract tens of thousands of visitors to the island, annually.

In 2010, salsa legend Alberto Barros kicked off the very first edition of CNSJ with a free concert on the Brionplein in Otrobanda, Willemstad and the rest is (recent) history. In the subsequent week leading up to the festival weekend of 3 and 4 September 2010, other artists performed in various places throughout Willemstad culminating in a musical explosion in and outside the World Trade Center complex at Piscadera Bay. The response was overwhelming. Artists such as John Legend, Simply Red, Lionel Richie, Raul Midon, Natalie Cole, Roy Hargrove & El Negro and George Benson just to name a few, wowed the crowd for two nights on end.

Naturally expectations were high for the second edition of 2011 and nobody got disappointed. On the contrary. Friday 2 September 2011 featured, among others, Sting, Earth Wind & Fire, Chic featuring Nile Rodgers and local talent Levi Silvanie. And if that was not enough, on Saturday 3 September, the crowd made the ground shake dancing on the tunes of Juan Luis Guerra, Ruben Blades and Stevie Wonder and many more ending another musical week that had started with a free concert of Los Van Van on Brionplein.

With the third edition of the festival in 2012, featuring, among others, guitar legend Santana, headliner Alicia Keys, Jill Scott, Sergio George’ All Star Salsa Friends, Caro Emerald and Dizzy Gillespie All-Star Big Band lead by Paquito D’Rivera, it was clear that the Curaçao NSJ had matured into an event that had become known, respected and loved not only on Curaçao but also in the international music festival circuit, with bookers and artists alike.

A team of researchers from the Dick Pope Sr. Institute for Tourism Studies of the Rosen College of Hospitality Management at the University of Central Florida conducted an economic impact study and assessed visitors’ satisfaction of the festival. The research showed that the festival has been a spectacular success for the island, attracting crowds of visitors during the two days of the festival and enhancing the destination image. Due to the festival, a significant amount of promotion was provided to the island of Curaçao, the image of Curaçao has become more positive and stronger, and the economic impact of the festival has been momentous. Curaçao North Sea Jazz Festival attracted 12,542 tourists during the past three annual festivals, generated nearly US$22 million in direct spending due to the festival, and had a total contribution of nearly US$40 million to the Curaçao economy.

However, visitors do not only come to enjoy the festival, but also to experience the friendly hospitality of Curaçao that, given the fact that artist spontaneously joined each other on stage during the last festival, is apparently contagious. The festival is yet another way the island of Curaçao, in all its aspects, is brought to the attention of international music lovers. Good vibes are well received by artists and fans alike. Just as Fundashon Bon Intenshon has forged great friendships year after year in collaboration with concert organizer Mojo Concerts, there’s no doubt that anyone who opts for a visit during Curaçao North Sea Jazz Festival will pleasantly find a wealth of entertainment and friendship.