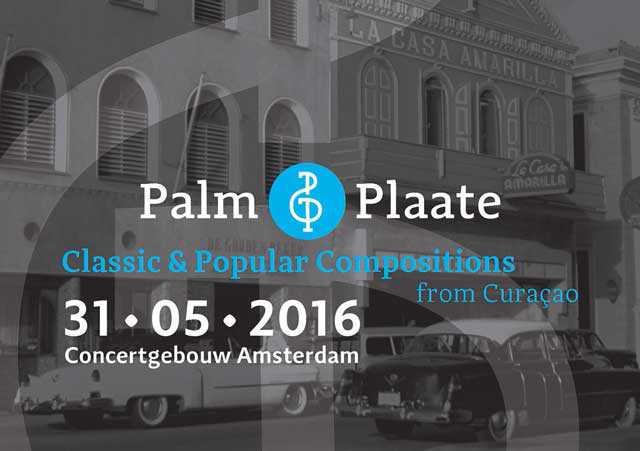 On 31 May, Het Concertgebouw in Amsterdam will be dominated by the works of Jacobo ‘Coco’ Palm and his family and Rudy Plaate. During “Classic & Popular Compositions from Curaçao – The works of composers of the Palm Family and Rudy Plaate” various artists accompanied by the Dutch Metropole Orchestra led by Maurice Luttikhuis, will bring a musical tribute to these Curaçao composers.

Izaline Calister, Maruja Bogaard, Randal Corsen, Norman Morón, Eric Calmes, and Pernell Saturnino, among others, will perform during this concert. Master of Ceremony for this evening will be Jandino Asporaat. Ticket sales for this concert will start on Friday 11 March at 10:00.

Jacobo ‘Coco’ Palm (1887 – 1982) is one of the classical composers from the musical Palm family on Curaçao. For more than 50 years, Palm was organist of the pro-cathedral St. Anna on Curaçao. He also was concertmaster of the Curaçao Philharmonic Orchestra for many years and member of the Curaçao string quartet for 12 years. Palm also made a name for himself as composer. He is known, among others, from compositions such as Un recuerdo, Anochi ta di gala, and Inocencia. In 1981, supported by Prins Bernhard Cultuurfonds, a large part of his scores were published in Obras de Jacobo Palm, album para piano, containing 66 of his compositions. His compositions reveal a thorough knowledge of classical music and a delicate feeling for the polyrhythmic nature of the Curaçao music.

Singer and composer Rudy Plaate composed over 400 songs, ranging from the waltz and tumba to the mazurka. The majority of his compositions, in Papiamentu, are about his deep love and admiration for his muse: the island of Curaçao. But also current affairs, social. and political issues on his beloved island are covered in his songs. One of his most famous songs is Atardi, perhaps the most popular song of Curaçao after the national anthem, about the typical atmosphere on the island just before the sun sets. Other well-known songs are M’a yega bar and Respeta polis. Besides being known as singer and composer, Plaate is also known as mentor of emerging young musical talent such as the popular children’s choir Perlitas.

“Classic & Popular Compositions from Curaçao – The works of composers of the Palm Family and Rudy Plaate” is made possible by Fundashon Bon Intenshon. With this concert the foundation completes a cycle with which, besides Jacobo Palm and Rudy Plaate, a tribute is paid to influential Curaçao musicians: Rignald Recordino, Macario Prudencia, and Boy Dap.